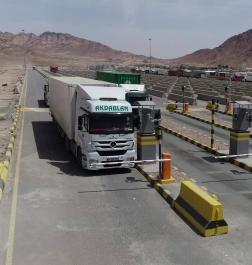 In December 2014, Foursan Capital Partners I (“FCP I”) and the IFC co-invested in Nafith Logistics (“Nafith”) and acquired 52% of the company’s issued and outstanding shares.  In addition, FCP I holds two of the company’s five Board seats.  Established in 2005 as a partnership between local sponsors and NTELX, an American software company, Nafith develops and operates technology-driven services that regulate and create efficiencies in shared freight transportation infrastructure.  Nafith’s current large scale projects are located in Aqaba, Jordan and the company is Jordan’s leading logistics management company, having markedly transformed the movement of freight at the Aqaba port and across other border crossings.  Today, Nafith employs over 300 persons, manages fleets that carry 80% of Jordan’s cargo and its systems are estimated to save the Jordanian economy $100 million per annum.  Recently, Nafith signed contracts with the Government of Iraq to manage truck logistics at multiple border and port crossings beginning in the second quarter of 2016, with the goal of substantially improving transportation and logistics efficiency in Iraq.

On March 15, 2016, Nafith’s CEO, Ms. Nourah Mehyar became the first recipient of the Multilateral Investment Guarantee Agency (MIGA) Gender CEO Award.  Among other things, Ms. Mehyar was honored by MIGA, a member of the World Bank Group, for integrating women into a male dominated workforce in an area where gender parity is close to non-existent.

Under the leadership of Nourah Mehyar, NAFITH Logistics—a multinational logistics company with hundreds of employees—has set up subsidiaries in developing economies in the Middle East, including fragile and conflict-ridden areas. These businesses have modernized networks, created jobs, and had significant impact on local and national economies.

But as a woman, her path to the top was strewn with obstacles men do not face. "Logistics, in particular, and especially in the region, is a male-dominated industry. I'm often the only woman in meetings," says the Jordanian native.

While with Mehyar at the helm NAFITH has significantly reduced congestion at ports and saved the Jordanian economy $100 million a year, "Initially, employees wouldn't look me in the eye," says Mehyar. "They wouldn't even acknowledge my presence. I felt I was invisible."

She recalls, "At first, I felt angry and I wanted change immediately. But my strategy has been to take baby steps. Culture change within the organization happens slowly, I had to take into account business norms and traditions and learned to enjoy the small wins."

Although men still dominate NAFITH's workforce, Mehyar has been prying open the doors to women. Currently, women comprise about 15 percent of her staff. "We started with six people, and now we have 300," she says. "It's still mostly men, partly because of the nature of the job. But administrative, finance, IT, and call center jobs are more accessible for women." Women are employed in leadership positions in NAFITH, including the Chief Financial Officer.

Mehyar believes that to maintain a sustainable workplace for women, the culture change has to come from the inside. It took several years for women to reach 15 percent of the workforce and effort is continuous. She expects to raise the bar going forward.

"There's a lot of mentoring and coaching, not just for women but also for their male counterparts—especially from rural areas. Due to the limited exposure of both genders when it comes to the other, setting work standards and behaviors is a must. We often found women excel after breaking the ice."

In honor of International Women's Day on March 8th, MIGA—the political risk insurance and credit enhancement arm of the World bank Group—awarded Mehyar its inaugural Gender CEO Award. MIGA insures NAFITH's investment in Iraq, which involves building and managing a system in the Basra governorate to control trucks entering and exiting three ports and the Safwan border crossing with Kuwait.

MIGA's Executive Vice President and CEO Keiko Honda presented the award to Mehyar during a ceremony in the World Bank headquarters in Washington, DC. In introducing Mehyar and the award, Honda noted, "Our clients are members of the private sector who have chosen to invest in developing countries. They are powerful sources of capital, knowledge transfer, and standard setting. This is why this award is important: it recognizes that the steps toward gender leadership among our clients will have an oversized role in development."

The award ceremony was followed by a panel Win-Win: The Case for Business and Gender that featured Mehyar and Honda along with Melanie Robinson (Executive Director to the World Bank Group for the UK), Sri Mulyani Indrawati, (World Bank Managing Director and COO), Nena Stoiljkovic (Vice President of Global Client Services, IFC) and Shantayanan Devarajan (MENA Chief Economist for the World Bank). The panel touched on many topics, including access to finance, the fear of women taking jobs from men, and the gap between perception and reality in this regard.

During the panel conversation Mehyar underlined that she sees evidence of growing gender equality every day. Appreciating the small wins has fueled her belief that gender equality is a realistic goal. "Last year, a male employee wanted to meet with me. He asked me about the path I took to become CEO, what I studied in school, and more."

She continued, "I asked him why he wanted to know. He said that when I first started as CEO, he was one of the men who wouldn't look me in the eye. Now, he wants his daughter to be like me."